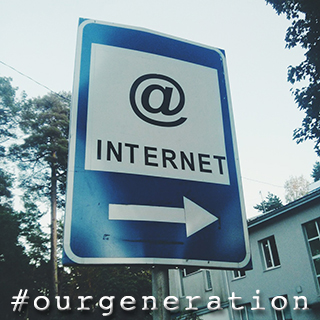 Our generation is a generation that has grown up in the 21st century and we have therefore the advantage of the modern day technology. Because of that, the internet has become a great part of our daily lives. Free internet is also guaranteed in many of the Baltic countries. So, we thought taking a picture of a sign pointing towards the internet would be a good way to visualize a part of our generation’s daily lives, which are also formed by our heritage, hopes and fears.

We started on this task by defining five subtopics that could describe our generation as it is today. Then later as we were taking the pictures we began to realize that there is more to our generation that meets the eye. Our lives are more than just smart-phones, being ‘’slaves’’ to the internet and the technology. We are people; we each have our own identity, our own problems and fears, and our own hopes and dreams. We are also the future of not only the Baltic States, but also the world, and we are the history yet to come.