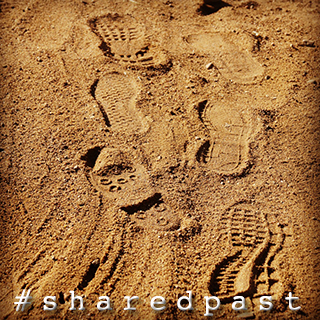 The Baltic States are connected by much more than just the Baltic Sea. They share common history, culture, and sense of belonging. Even though we are separated by borders, we are all connected. Not only can we identify similar traits in ourselves, but also many states have been united in war as well as in peace. This is our vision of #sharedpast

Our group picture represents our understanding of sharing past together. The footsteps from different shoes portray our diversity and individual identity, but they also illustrate that even if we are all individuals, we share the same way; from the past into the future.

What we wanted to accomplish was to portray the atmosphere of both Ivangorod and Narva in a unified way, as the two cities are interconnected socially, linguistically and culturally. Our approach was to explore the cities from grassroots levels, which is why we incorporated pictures from nature, the setting and what we felt created the essence of the cities.